I recently added a bunch of Godox Reemix II 3 in 1 radio triggers to my photography kit.

Previously I had been using Pulsar’s for my photo strobe triggers and was not very happy with their reliability…. which frankly has been poor. Build quality is poor, with connections often not working, and they are particularly sensitive to battery condition.

So, I had been looking to replace them for quite some time, but was not happy to shell out the money for the Pocket Wizards… I dont need TTL on a radio slave, so why should I be paying for it?!

I had heard some good reports about the Godox’s, so I went to Elementals website http://www.studio-flash.com/godox/reemix.html and as they were so inexpensive ordered a trigger and three slaves.

They arrived promptly and I did a few tests and everything seemed to be fine, so put them into my kit and flew off to Dusseldorf for a two day corporate photography shoot for E.on Energy Trading. These are pretty intensive, and over the two days I did a series of portraits of around 50 senior executives using a two light setup in various locations throughout the building.

Previously using the Pulsars there was always a level of nervousness, nothing is worse for you and your sitters confidence if the gear doesnt work….

But the Godox’s preformed faultlessly for the whole two days. The batteries lasted the whole two sessions, and I dont think I missed any pictures due to the triggers not working.

There are a couple of issues;

Top shutter speed is not reliable above 160th of a second, works most times at as high as 1/200th but the occasional shutter shadow can be seen…

Build quality is on the light side, in particular anything more than a small brolly on the built in holder causes the unit to partially come apart at the battery door, and the bracket and its attatchment is a bit light as well… so the whole affair feels slightly dodgy when you are using a bigger flash like the canon 580’s on the built in hot shoe… But of course if you want heavier build its gonna cost..

I am still getting random self triggering on these units with my 580ex 2, something which doesnt happen on my 580ex 1’s……… I still cant decide if its the flash, or the trigger, or something external like radio waves in a particular building….

Dave also has a set, and the main switch on his camera trigger has gone dodgy, so he is getting that sorted.

Value for money is excellent, and I would recommend them.

We have now added the Canon 5dmk3 to our fleet of cameras, so here is our initial review of the new cameras. The new cameras give us better video controls, adds much improved auto focus… 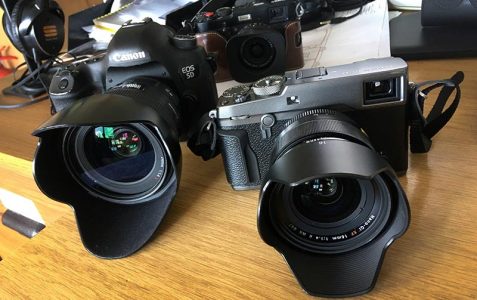 For many years we have produced our photography on Canon cameras. But now we shoot with the Fuji X system! Changing entire camera systems is a big deal for most photographer,  and probably happens no…

I recently spent a long Saturday photographing the Alliance Healthcare’s charity Football/Netball Event in Nottingham for Seven Publishing. It was an unexpectedly hot day, and the shoot involved a wide range of subjects, including action,…